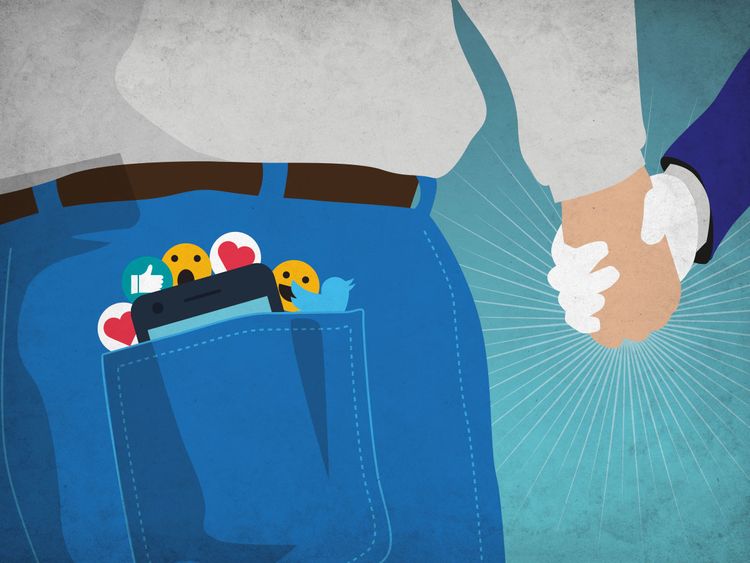 “Addiction is actually the point. That’s what social media shareholders are investing in.”

The accusation came from US Senator Josh Hawley, the Republican politician, in a speech at Stanford University. While some politicians have argued for years that tech giants such as Facebook are dangerous for the economy, Hawley’s argument is that they are dangerous for us as people, creating “a society increasingly defined not by the genuine and personal love of family, but by the cold and judgemental world of social media”.

Are Hawley’s concerns about the downstream social effects of these platforms warranted? Research is in its infancy, and the early results are mixed. However, I see a consensus starting to emerge. The findings from a recent article in the journal Psychiatric Quarterly by psychologists Jean Twenge and W. Keith Campbell are typical, showing an enormous negative association in adolescents between heavy social media (and other digital media use) and life satisfaction. In their words, “Heavy users … of digital media were 48 per cent to 171 per cent more likely [than light users] to be unhappy, to be in low in well-being, or to have suicide risk factors such as depression, suicidal ideation, or past suicide attempts.”

Of course, correlation isn’t causation, and it’s theoretically possible that depressed teens are simply more likely than their peers to engage in heavy social-media use. The best way to sort this out is to use experimental methods — as with drug tests — where social media is randomly assigned to people and the effects compared with those of a control group.

A few studies have done this. For instance, last year, University of Pennsylvania researchers reported in the Journal of Social and Clinical Psychology on their study of undergraduate students randomly assigned to one group with dramatically limited use of social media — 10 minutes per day on each of three platforms, Facebook, Instagram and Snapchat — while a control group was given unlimited social-media use. The result: Compared with the control group, “the limited use group showed significant reductions in loneliness and depression over three weeks.”

Heavy users … of digital media were 48 per cent to 171 per cent more likely [than light users] to be unhappy, to be in low in well-being, or to have suicide risk factors such as depression, suicidal ideation, or past suicide attempts.

The research to date has generally focused on young people, for the same reason that we are most concerned about the marketing of any addictive product to children: We don’t consider them responsible for their habits and thus must protect them from exploitation. But many adults confess that they worry about the effects of excessive social-media use on themselves. In my professional world, I have seen heavy Twitter use lay to waste the reputations of respected journalists and utterly consume the productive time of great scholars.

It’s not as if this is the first time we have seen the negative properties of communication technology. Consider the telephone. Going back nearly 150 years to the time of the phone’s invention, the New York Times argued in 1876 that when the telephone became ubiquitous, people would no longer go out in public, creating a societal breakdown. “The telephone, by bringing music and ministers into every home, will empty the concert-halls and the churches,” the Times said. “The telephone may really be a device of the enemies of the Republic.”

The prediction was overwrought, as these prognostications tend to be, but many older readers will remember that in their youth some people were near recluses in their homes, talking for hours on the phone. Perverts and bullies would make crank calls, a parallel phenomenon to the anonymous use of social media and “trolling”. My parents had just one phone in the house to disincentivise anti-social behaviour and make sure we kids weren’t talking to weirdos.

What changed with the telephone? We made progress by learning how to use the technology beneficially. As a rule, today we are the master of the traditional telephone, not the servant.

And so it can be with smartphones and with social media generally. No one thinks that a few minutes a day on Twitter to see what’s trending in one’s area of interest or using Facebook to set up activities with friends is deleterious to one’s mental health. Note that Twenge and Campbell found that light users actually tend to be a bit happier than non-users. Light users employ social media as a complement to real life. The problem is when light use metastasises and begins to substitute for the real human connections in life.

Some think that the supposed addictive properties of social media make this metastasis inevitable for many people. Others, such as Hawley, believe that the companies encourage this for commercial purposes: “Social media only works as a business model,” he said, “if it consumes users’ time and attention day after day after day.”

Since he can’t unilaterally make social media disappear, presumably the objective behind Hawley’s argument is more regulatory scrutiny and oversight of the companies. Economists call that a “supply-side solution.” Another supply-side solution is for tech companies to voluntarily resist the innovations that give social media addictive properties. Or they could impose other controls on abuse, such as banning anonymity and more tightly enforcing age restrictions.

However, there are also “demand-side solutions”, controlled by us as users, consciously limiting our exposure and rationing our use of social media. It starts with the question of whether social media is substituting for the people and things we love and value. Ask: Do I have fewer in-person interactions because of social media? Am I using social media to pass the time? For a writer like me, has Twitter displaced any of my work on articles and books? If my answer is yes to any of these, then it’s time for a reset.

One effective way to correct unhealthy social-media habits is to “fast” for a few weeks and then come back with strict limits on use — for example, a few minutes per day on any individual platform. That puts social media where it rightfully belongs: under each user’s control, and as a complement to real life.