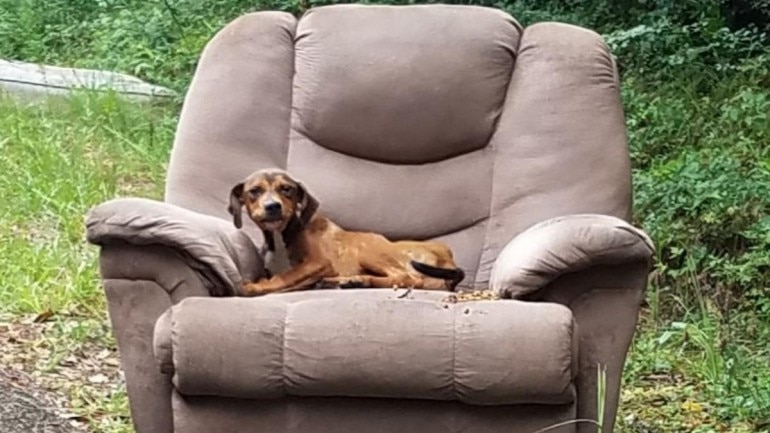 Pictures of an abandoned puppy dumped on an armchair on a Mississippi road went viral on Tuesday and has made the internet very emotional and of course, angry. In the images that are being widely circulated across the internet, a pup can be seen, waiting for its owner in a forlorn state on the armchair that has been dumped by the road. A television was also spotted beside the armchair.

Sharon Norton, Animal Control Officer at Brookhaven Police Department in Mississippi, shared the pictures of the puppy on Facebook with a stern message. In her post, Sharon wrote that the puppy was “starving to death” and it wasn’t willing to leave the chair so as to find food because it was scared.

“I get a message this morning to go check out this dog that’s in the chair, this is what I pulled up and seen.. To the person that dumped this chair, your puppy was waiting for you to come back,,slowly starving to death because it was afraid to leave the chair to find food. shame on you for doing this to this puppy.. but one day Karma will meet up with you,” Sharon wrote on Facebook and also shared another picture in which she was seen feeding the pup.

Sharon posted the pictures with the message on a Facebook group called Lost And Found Pets in Lincoln County, MS.

Sharon’s post has been shared multiple times with angry and emotional comments from the internet. “Oh this breaks my heart. Poor baby !!! God bless you for saving him. I’d look in back of chair or down sides for papers to see if I could find a name of may have done this,” said a user, while another said, “That is so mean. They need to be arrested & the key lost forever. Pets has feelings to. We may not know who you are but God knows & you will pay for doing that. That is cruel!!”

WLBT reports that the puppy is being taken care of by the Brookhaven Animal Rescue League and will be placed for adoption after he recovers.